There are too few Monarch butterflies in my garden this fall. We are a regular stopping point on their migration to Mexico, so we often have hundreds, but this month I’ve seen a scattered handful. Normally this would just be a disappointment, as weather sometimes blows them on a different route, but this year it is a larger concern. Monarchs are not being reported in numbers anywhere in the country. As with any species, including our own, they disappear with their habitat. They need milkweed, but the widespread use of certain herbicides have cleared the rough edges of farmland where it used to grow.

Herbicides, pesticides, carbon emissions, plastics and rising seas, it sometimes seems as if we are in too deep, as if we can never recover the health of our planet. Scientists are calling this the Anthropocene Era, acknowledging that humans are now the largest single influence on earth. But the door swings both ways. If in the past we have handled our stewardship of the earth poorly, it also means we have the power to turn it around.

This summer, I gave a sermon at the Gloucester Unitarian Universalist Church on just that, empowering ourselves and our local governments to make environmentally smart choices. Small acts, even composting, can turn the tide. Food and yard waste take up one third of the nations’ landfills, releasing methane gas, which adds to global warming more than carbon dioxide released by fossil fuels. In some cities, food waste is put out on the curb, just like recyclables, then processed into a rich compost for sale to local farms. The checkout counter is another arena for change, especially in our coastal community, where plastic debris is a scourge upon the sea as well as the land. Water bottles and polystyrene coffee cups break down into fragments the size of plankton, killing fish that mistake it for food. Floating plastic bags and deflated balloons are devoured by sea mammals and turtles thinking they are jellyfish, strangling their guts until they, too, are as scarce as Monarchs. For the butterflies, we can plant milkweed, but we can also refuse the genetically modified crops that were developed to withstand the herbicides that killed the milkweed in the first place.

Dick Prouty, the UU board chair, also gave a sermon this summer, aimed at reducing the carbon footprint of our historic church, within the context of working towards a carbon-neutral Gloucester. In this spirit, the Church is hosting “Leadership for a Green and Sustainable Future,” a mayoral debate between incumbent Carolyn Kirk and challenger Mac Bell, moderated by Jack Clarke. Questions on environmental issues will be submitted by middle and high school students, a citizen’s advisory panel, and fielded from the audience. We don’t have to wring our hands, we don’t have to sit on our hands, we can listen, learn, act, and vote. When we all row in the same direction we can effect change. We might even bring back the Monarchs.

The 90 minute program will be held on Tuesday, October 15, at 7 p.m. at the UU Church Meetinghouse, 10 Church Street, Gloucester. Donations to benefit the church’s green initiative will be gratefully accepted at the door, or seats may be reserved on the event registry page at www.maritimegloucester.org.

This essay was originally published as a My View column in the Gloucester Daily Times, 10/9/13 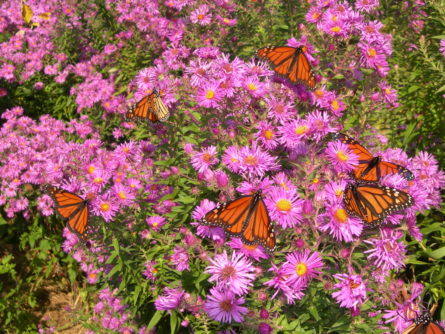