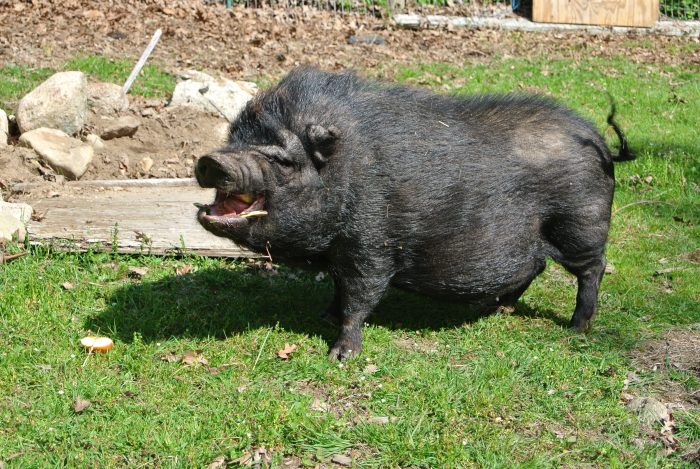 There is a saying in the book reviewer world, that if you review a book with a pig on the cover, you will be destined to review all books with pigs on the cover. And so it has come to pass. Not long ago I reviewed Allowed to Grow Old by Isa Leshko, a book that examined the world of rescue livestock in photographs and words. OINK, compiled by Renée Hollis, is more of a gift book for the pig aficionado than a manifesto of porcine rights, but still, it’s a lovely collection of photographs and sayings that will warm the hearts of those humans who consider the pig an intelligent and lively friend. Hollis’s own love for pigs began when someone named a piglet after her, and who can resist that sort of flattery? She quotes Anatole France, “Until one has loved an animal a part of one’s soul remains unawakened.”

My only quibble is that OINK seems be geared to those who keep, or want to keep, pot-bellied pigs as pets. I own pigs and I love them, but they are not house pets, nor should they be. And not just because their little hooves have no traction on wooden floors. One of our pigs, Iggy, came to us through a friend helping to find her a new home, fast. Iggy was then over a year old, which is considered full-grown, and she lived in an apartment in downtown Gloucester. “She’s a tea-cup pig,” my friend said. “She’s small and she’ll stay small.” Iggy’s owner had gone in for minor surgery and did not survive, and the boyfriend was pig-sitting. I’m sure Iggy was a great solace in his grief, and he to hers. But when his landlord found out there was a pig in residence, the boyfriend was given the usual exotic pet ultimatum, either the pig goes or he goes.

We took the pig. As foretold, she was small. And thin. I could easily pick her up in my arms, and that’s not good. The thing is, there is no such creature as a “tea cup” pig. That’s just a cute label that breeders put on a regular pot-bellied pig, whose size may vary from 75 to well over 100 pounds. Smaller than that is a malnourished animal. New owners are instructed to feed their pigs a pittance to keep them small, barely enough to keep tail and snout together. Iggy was a delightful new addition to the barn, but she was starving and obsessed with food. With the appropriate diet, it did not take her long to attain a robust weight. I would be hard put to wrap my arms around her middle today, nevermind pick her up. She lives out in the barnyard with our other pig, Hamlet (a petting zoo rescue), and has a generous fenced-in area for digging for roots and generally mucking about. She feels good about her size and her place in this world. She has a happy life. So, please, do not read OINK and go out and buy a pet pig. Instead, love the breed by not eating them. Towards this end, a book like OINK serves a purpose in letting us see pigs as the charming and sensitive souls they are, and not pork on the plate.