Two days before Christmas, Mr. Black Goat, of ancient years, had a stroke which left him unable to walk. I fed, watered, and cleaned his bedding three times a day, each day expecting it to be his last. His brother, Mr. White Goat, had died of a quick series of strokes the year before, and I thought Black Goat was going to go the same way. I waited for another stroke to take him, or for him to turn his head to the wall and go. I’d never had a goat who didn’t know when it was time, except for him. He was not ever going to walk again, but he seemed not to care. His appetite was robust, and he was engaged with Mr. Pig and the chickens.

This went on for thirty days, and it was clear he wasn’t going anywhere. But I was. I had to travel, and I could not leave him to another’s care, and I did not trust Mr. Pig to let anyone near Mr. Goat even so. I make a promise to all my animals that I will not let them suffer when the end comes. And the goat was going to suffer. If not now, then soon. As this brutal winter slogs on, his damaged body would weaken with bed sores and chronic pain. I called the vet and he came to the barn and gently put Mr. Goat down. It was so frigid, the tears froze on my face.

We had dug a grave back in November, not expecting him to live through the winter. He was old, he was arthritic, and he did not have his brother to help keep warm the long winter nights. When his brother died, almost a year to the day before, it was unexpected and the ground was hard. We’d had to do a winter burial, which means to create a secure, above-ground crypt until the ground thaws. I was so moved by that experience I wrote a poem — my first ever, and most likely my last. It was published in Harpur Palate this past fall, and I reprint it here in both their memories.

He met her at the gate with the cart
and she covered the animal with a sheet.
They pulled together to the place
behind the barn.
The ground was frozen.
They laid their friend on the hard earth
adjusting his head, his yellowed horns
ridged with years.
She tucked the sheet around him,
collecting his dignity.
It’s a dirty business
storing a body for the winter.
They carried the black box
and covered him.
Stacking heavy stones on that
against the predators.
Snow was coming.
They might not see the box for a long while.
Say a prayer, he said.
I have no words.
Write a poem then, later.
I don’t write poetry, she said.
You will, he said.

The ground opened in March,
a sudden, violent thaw.
They peeled away wet leaves made dark by time.
The shovels cut through fibrous roots
like matted fur.
Runners hard as shins were severed.
The water table was high.
Life coursed beneath their feet.
They removed the stones
then the black box, letting it fall aside.
The body was fresh
as if they just found him in the barn,
the morning sun a shaft of dusty light.
Worn hooves and gloved hands met
for the unseemly haul to the pit
which swallowed him whole.
Then relief. He is where he was meant to be.
She tilted his horns to display his glory,
and said a prayer.
God.
Nothing else came.

When the hole was filled
they went to the shed for rakes
to smooth over what’d been done.
On return, a goat was standing on the grave
staring down, comprehending,
or not,
as his friend got ready to do
the hard work of becoming one
with the land. 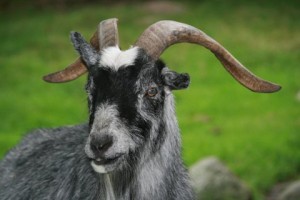