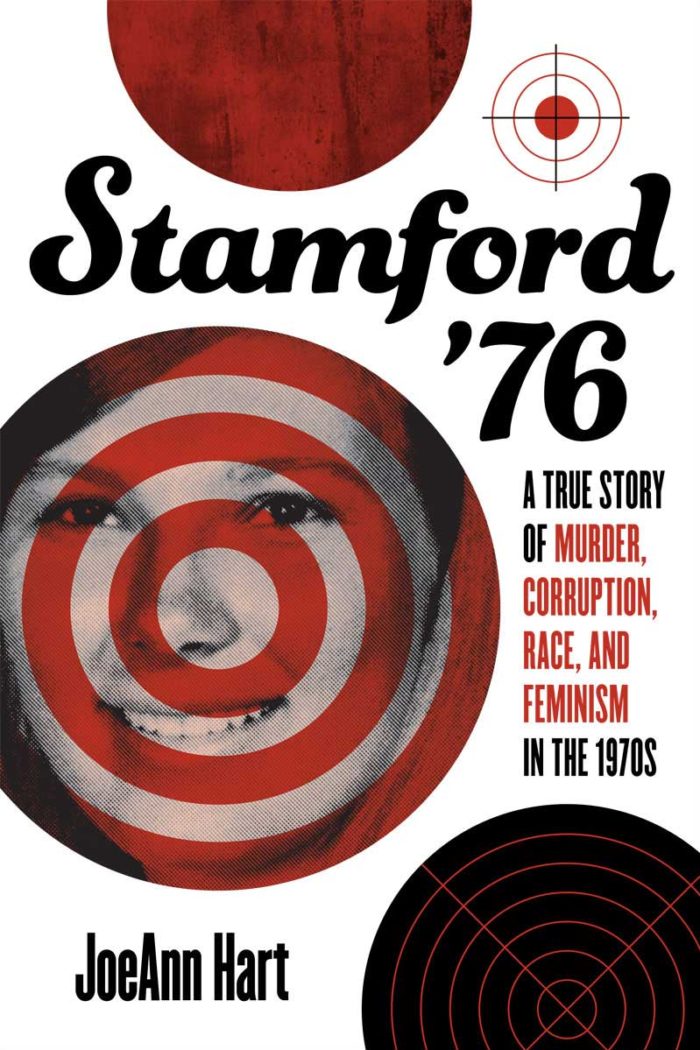 As I read JoeAnn Hart’s page-turning memoir/crime story, Stamford ’76: A True Story of Murder, Corruption, Race, and Feminism in the 1970s, I traveled back some forty years to a more hopeful, idealistic time—the late sixties/early seventies. As Hart writes, “we closed our eyes and divined a future, a utopian world with pleasure and possibility.” That vision included an end to war, and an atmosphere of love, acceptance, and equality of all people, regardless of their faith, gender, ethnicity, and lifestyle.

As a teenager, I embraced the counter-counter’s mantras: Make love not war. Love the one you’re with. Give peace a chance. Flower power. At a Crosby, Stills, Nash, and Young concert, packed with teenagers passing around cigar-sized joints, the crowd fell under the spell of the singers’ close harmonies and dreamy lyrics of love and peace. As they belted out, “We can change the world…yes, we can,” the 50,000 or so young people stood up and applauded. Yes, we can do this.

Yet, it’s one thing, as Hart points out, to sit in the glow of a warm and fuzzy hippie concert. It’s another to live the reality of day-to-day life in 1976. Hart characterizes herself back then as an idealist, seeking a higher moral ground in Stamford, Connecticut. But the town proved to be rather conservative—not all that accepting of interracial couples. Further, her boyfriend, Joe, didn’t always live up to her idealistic view:

I had entered my relationship with Joe with expectations I didn’t know I carried. On some unarticulated level, I was drawn to the idea of me and Joe as some manifestation of equality, both gender and racial. There we were after all, black and white, man and woman, side by side. The racial self-evident—but gender? Logic has never been idealism’s strong suit. Every time I’d pointed out some inequity in our relationship to Joe, something base as who had first dibs on the car, he said, “What are you going to do? Call NOW?” as he drove away, laughing. He thought the National Organization of Women was a joke, and feminism itself hysterically funny.

It wasn’t funny. It was nothing less than self-determination. It’s what, in the end, we were all after. Me, Margo, Howie, Joe. We wanted equality. We wanted justice. We wanted not to be controlled by the world as it was.

As Hart mentions, she and her boyfriend became good friends with another interracial couple, Howie Carter and Margo Olson—bohemians who smoked dope, dealt drugs, and did odd jobs to pay the bills. She writes, “For every man who climbs a mountain, there’s a woman who sleeps with a man her parents would not approve of…. Conscious or unconscious forces drew her to a man [Carter] who, by the time I met him, was downright creepy… the type of dangers that can sometimes feel like love.”

Yet, Hart didn’t expect Olson to be murdered. A high school teacher, doing research on the grave markers in Stamford’s old potter’s field, discovered her decomposing body. An autopsy showed she had been shot twice in the heart with arrows. Her boyfriend, Carter—a bow hunter—was the prime suspect. Making the case against him even worse, he’d joked at a poker game, that if he ever had to murder someone, he’d do it with a bow and arrow.

Even so, this is not a slam-dunk case. Hart spends the next thirty years wondering why Carter (though creepy) would commit such a heinous act. What could have been his motive? These questions nag at her until finally she digs into old police reports and files.

Unfortunately, Carter was involved in a robbery immediately after Olson’s murder and was shot and killed by a police officer. Thus, he was never able to tell his side to this story.

Hart does a remarkable job fitting together this odd puzzle and arriving at several plausible solutions as to “why” and “how” Olson was murdered. By framing this story not just in this specific era, but also in this specific community (one that perpetuated, at this time, racism, gender stereotyping, and police corruption), Hart arrives at some eye-opening and rather disturbing theories about what potentially happened to this interracial couple.

Debbie Hagan is book reviews editor for Brevity and teaches creative writing at Massachusetts College of Art and Design. Her essays have appeared in Harvard Review, Hyperallergic, Pleiades, Superstition Review, Brain, Child, and in various anthologies.