Thank you Marshall Zeringue for the interview with me and my dog, Daisy, on his site, Coffee With a Canine.

I usually reserve this blog for all things plastic, but Daisy asked for a little limelight, and how could I refuse? Besides, as she pointed out, plastic concerns her as well. Dogs and their owners are a little worried what will happen in communities where single-use plastic bag bans are enacted. What will they use to pick up dog poo? Relax, I tell her, there are so many exceptions to these laws there will still be plenty of plastic to go around for that purpose, which is a pretty silly purpose to begin with. In my neighborhood, dog owners pick up after their dogs then leave the plastic bags of poo by the side of the road. There is even one evil dog owner who tosses the bag into a tree, where it then hangs on a branch for all eternity. All this for a substance that will very quickly decompose on its own if kicked under a bush? Cities are another matter, and Daisy points out that there are biodegradable doggie waste bags at your local pet store. So they claim. But the bags must meet ASTM D6400 specifications, and not many do. Breaking up into teeny fragments does not make plastic biodegradable, it only makes it easier to slip into the oceans and become toxic ‘food’ for the fishes, who then pass these toxins onto us. If they live that long. Having said that, most plastic that meets ASTM D6400 specifications are made from corn, the worst possible choice. It takes up valuable farmland and uses an inordinate amount of oil-based fertilizer and toxic pesticides. When I told Daisy that she wanted to cry. Me too, I said. I gave her a biscuit, and told her we — the humans — would keep trying. We’ll try other things to make plastic polymers from, like algae. Or jellyfish! We are not a particularly good species, like dogs, but we are very clever. If consumers (another word for humans, I tell her) keep demanding something, they’ll get it. In the meantime, I asked if she was okay with a paper poop bag, and she said yes. She’s such a good girl.

Coffee with a Canine

Who is in the photo at right? 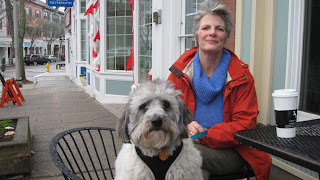 This is a photo of me and my dog Daisy. I’m JoeAnn Hart, author of the novels Addled and Float, both of which have all sorts of animals in them, including dogs. We live in Gloucester, Massachusetts, although Daisy is from West Virginia, where she was picked up off the streets when she was around nine months old. I adopted her from Save A Dog in Sudbury, Ma. in 2010, so she’s still young. She’s a messy Cock-a-poo, with a miniature poodle dad, and a Cocker Spaniel grandmother, who slept around, so Daisy’s mom was only half Cocker Spaniel. We only know this because my sister is a vet and had Daisy’s DNA tested.

What’s the occasion for Coffee with a Canine? 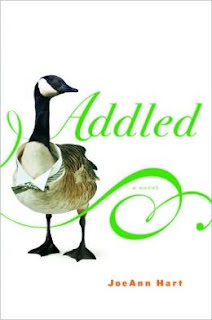 I had to drop my husband’s car off to be repaired, and in exchange, he bought me a coffee at Lone Gull. Daisy came along for the ride. She loves the car and all the smells on Main Street, but she has to wear a harness when she goes anywhere with me. Her head is smaller than her neck, so a collar is just a place to hang her license.

I’m having a large light roast with milk. Hot, because it’s not ice coffee season quite yet.

Any treats for you or Daisy on this occasion?

I was tempted, because I love Lone Gull’s almond cookies, but resisted. No goodies for either of us. Daisy loves sweets but she puts on weight too easily to indulge her. She finds ways to indulge herself as it is. We think she was raised in a dumpster in the back of a bakery, because she cannot resist frosting. At Christmas we found her on the dining room table with her face in the whipped cream and gingerbread, but that was nothing compared to last summer, when the day after my son’s wedding we found her with all fours in the leftover cake. She is a very well-behaved dog except for this one strange obsession.

How did Daisy get her name? Any nicknames? 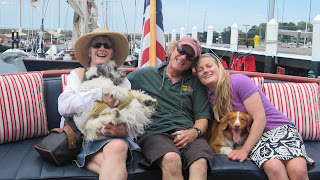 Daisy was the name that came with her from Save A Dog. For weeks we played around with other names and none of them fit quite as well. So Daisy she stayed. Sometimes we call her Sausage because of that weight issue. We don’t consider that an insult, and neither does she. It is simply her shape.

How were you and Daisy united?

I had lost my standard poodle, Annie, in 2009. She was 16 years old when she died and I was just too heartbroken to get another right away. When I was ready in the fall of 2010, I started looking at shelters across New England. I knew I wanted a rescue, but I needed a hair breed or mix because of allergies, and I wanted a medium-sized dog this time. It turns out that most dogs at shelters tend to be either very small or very large. I spent a lot of time searching near and far, but every time a candidate popped up, it was already taken by the time I contacted them. In December I decided to wait until late winter, when, unfortunately, many puppies given as Christmas 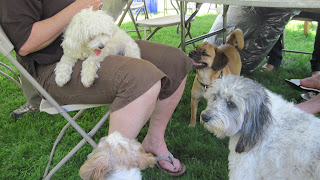 presents are surrendered for adoption. Then, three days before Christmas, I got an email saying Daisy had just arrived at Save A Dog. I drove down there and I fell in love. She was exactly the dog I was looking for. We took her home the day before Christmas.

Who are your dog’s best pet-pals?

She loves other dogs. She adores Gussie, my daughter’s Nova Scotia Duck Tolling Retriever, but Gussie doesn’t even look at her when she visits so we can’t call her a pal. Daisy was an only dog until this summer, when my husband got a Golden Doodle puppy, Happy. It was then we realized that Daisy loved dogs, not puppies. Happy hung on her ear all day, like a large fuzzy earring. Now Happy is older and calmer, not an annoying puppy, so they are best friends. They especially like to chase squirrels around the yard together.

What is Daisy’s best quality? 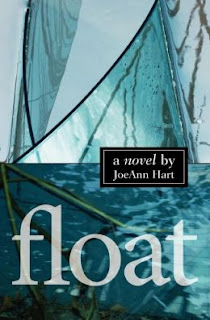 If Daisy could change one thing about New Englanders, what would it be?

Daisy wishes New Englanders would make more cakes with frosting and leave them unattended. She has very powerful little thighs, so leaving them on tables is just fine with her. She’ll get there.

If Hollywood made a movie about your life in which Daisy could speak, which actors should do her voice?

Jennifer Aniston. Daisy is that sweet.

If Daisy could answer only one question in English, what would you ask her?

I’d ask her what her life was like before we met. What was she doing wandering the streets of West Virginia? I know there are a lot of puppy mills there, so I sometimes think she was tossed in a dumpster when she didn’t turn out to be a perfect Cock-a-Poo. A dumpster behind a bakery.

One Reply to “Daisy and I Have a Mug Up”