“What now?” I muttered as my trowel hit an obstruction. “A plastic something.” In the depths of a major garden excavation for my son’s wedding, I kept coming across indestructible bits of our family’s life. Bare tennis balls, bottle caps, keys to cars we no longer owned. This time, though, as I cut away the roots wrapped around my latest find, annoyance gave way to memory. It was a child’s green plastic shovel, and as I turned it over in my hands, years of sitting at the beach with children washed over me.

“What a luxury,” people had always said, “to live within walking distance of the water.” What a pain, I’d grumble to myself. I grew up with suburban sprinklers, not ocean, so I was not a relaxed summer-time mom. Getting the kids ready for our daily beach expedition was like being backstage at a circus, helping squirming bodies into suits and painting faces with sunscreen. Adding up the hours, I have spent a full week of my life searching for sandals the length of my pinky. I could not begin to guess the time spent packing The Bag: Sunscreen, water, box juices, cookies, mini-carrots, peanut-butter sandwiches, towels, more sunscreen, and a blanket. I was exhausted when I finally hit our isolated patch of sand, and it was just the beginning. Clutching a sweaty baby boy while digging a moat with a toddler without taking my eyes off the oldest at the water’s edge was no day at the beach. I did my best to identify the sealife for the two older girls (“that’s a dead crab, honey, put it down”) and answer their questions about nature. “Why is the water blue?” Because it reflects the sky. “Why is the sky blue?” Have a cookie.

We stayed as the tide played in, then out. (“Where does the water go?”) We kept time by an upright stick in the sand, and when its shadow reached a certain angle they knew we had to head back. After packing up camp, an epic adventure of lost and found, we’d begin our forced march, me pushing the stroller with baby and toddler smushed together like sardines, the oldest lagging behind and whining. This was followed by the hose-down, story-time and a nap. That last one more for me than them.

Oh, it got easier over the years. My job became that of lifeguard, albeit one who burned easily and got dizzy from the sun. I sat in a chair, a magazine open on my lap, and watched the kids float like soap bubbles and swim like otters, dark shapes against the sunlight on the surf. Occasionally I’d be called into duty to help steady a kickboard, but mostly they tried to lure me into the water so they could hear me screech like a seagull. My children, true New England beach babies, are unfazed by the sharp slap of the frigid Atlantic. I will never get used to it.

One by one, they reached the age to beach it alone. My oldest girl would run off after breakfast and I’d meet her down there with the two younger ones. In later years, there was just one with me, and then there were none. After that, I’d only go to check that everyone was using sunscreen and staying hydrated. Usually I’d just find them working on their tans, but well into their teens, I’d catch them building kingdoms of sand, festooned with seaglass and bird bones. At the end of the day they’d watch their creations wash away with a shrug. To them, raised on tides, change was the way of the world.

Not so many years later and there I was with a little green shovel. Slipping two fingers into the handle, I could feel the small hand that once wrapped around it, and suddenly I missed the beach. Not the heat or the sand fleas, but the three familiar shapes moving through the water’s brilliant light. I missed their childhoods, and sometimes, I think, so do they. For his wedding, my son wanted a sand castle cake, a clambake at the beach, and silhouette photos against the sun as it dropped into an orange-red sea.

I stuck the shovel in a pile of dirt and tried to guess the time.

This essay was originally published in July, 2013 online at Brain, Child, the magazine for thinking mothers. 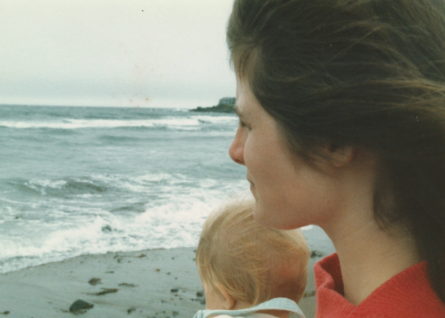 Filed Under: The Beach