The Bible is the best selling book in the world — more people have read it than any other text.  It is, from a publishing standpoint, a miracle, more spectacular than if they could turn water into wine, and even more profitable.  It’s been printed in every language, in every country, and can still be found tucked away in hotel drawers.  In the past, it was often the only book to be found in the thatched cottage or the immigrant’s trunk.  It is perhaps the single most influential piece of literature in the world.  It is considered to be the prototype for most of the genres, plots and themes of English and American literature.  There are more than a thousand biblical references in the works of Shakespeare alone.  John Milton, Herman Melville, and Ernest Hemingway all drew on the Bible for inspiration, and Hemingway, on the advice of Gertrude Stein, typed out the Bible to learn the rhythms and meter that would become his trademark style.  Somerset Maugham wrote:  “It was generally thought that the Bible was the greatest piece of prose that the English language has produced.  I read it diligently, jotting down for future use turns of phrase that struck me.”  Which only goes to show that fiction writers are not just liars, but thieves as well.  And I speak from experience, since I jot down Somerset Maugham phrases for future use.  But that door swings both ways.  Many of the Bible stories are variations on much earlier stories.  The biblical flood is strikingly similar to the flood in Gilgamesh, which preceded the Bible by centuries.  Many of the greek heroes, like Hercules, were born of a god and a mortal woman.  And like Gilgamesh and the Greek myths, the Bible is more or less an elaborate fiction written in the service of religion.

Or as Sportin’ Life says in Porgy & Bess, “The things that you’re liable, To read in the Bible, It ain’t necessarily so.”  What ain’t necessarily so begins with Genesis, the Bible’s origin story.  Origin stories are a fixed chapter of all religions meant to answer that nagging human question: Who are we and where did we come from?  According to the Bible, the world was created in seven days by an omniscient and all-powerful God.  Fundamentalists still cling to this fiction in the face of overwhelming evolutionary evidence to the contrary, and maybe for good reason.  Fiction fulfills a greater human need than science.  Creation myths identify heroes and sacred places, acknowledging a magnificent power beyond ourselves, and with it the possibility of life beyond our years.  Fundamentalism relieves us of the burden of living with our own mortality.  Evolution provides no comfort in this corner whatsoever, as it seems unlikely that we will ever evolve into transcendent or immortal creatures.  Scientific theory places humanity on a vast continuum, where individuals are an anonymous and insignificant speck caught in the swirl of an icy universe — a far cry from the omniscient Biblical God who notices even when a sparrow falls to the earth.  It’s comforting to think someone is watching and that we matter at least as much as the sparrow.  But evolution it is, for better or worse, although religion and science are not mutually exclusive.  In the long narrative arc of the Bible, even God undergoes evolution.  He starts out in the Old Testament as a demanding, peevish bully, but in Part II, the New Testament, he is more or less replaced by his son as the main character of the book, as if the author realized that the story needed a gentler, kinder protagonist in order to keep the reader’s interest.

But just who is this author?  In Genesis, God created the world.  But who created God?  Who put the words on the page to make him come alive?  Who was privy to the private conversations between God and Satan in heaven?  Who peopled the Bible with characters and infused them with meaning?  Growing up in a Catholic culture, I assumed that the Bible was written by God, since the nuns called it the word of God.  I believed this even though it was clearly not written in the first person.  Was God one of those annoying people who referred to themselves in the third person?  It didn’t really matter, since you can’t argue with the word of God.  To point out a contradiction in the Bible, or even to ask what sort of great fish was it that Jonah lived in for three days, was to ask for the ruler across the knuckles and a lecture on why we were too dense and sinful to understand God’s will.  It wasn’t until I took a Bible as Literature class in public high school did I begin to understand that it was written not only by a mere human, but by many of them, with input from different religious traditions and a big pinch of Babylonian mythology, and that it was composed over a period of centuries.  It is the ultimate anthology, written, compiled and edited by a committee, or more precisely, generations of committees, with one serious agenda.  These human authors were searching for the truth of God, consciously creating a sacred text, not a historical record.  Their objective was truth, not fact, and those truths are embedded in the layers of poetry, proverb, letters and parables that make up the beautiful fiction of the Bible.

This fiction has served many masters. Some Biblical stories are blatant cautionary tales told in the name of social control.  Think of Adam and Eve and their sad story of temptation.  Disobey God and eat that apple and you will have to work for a living and suffer in childbirth not just for the rest of your days, but for the rest of mankind’s days.  Disobey God and look back on home and turn into a pillar of salt — not just any pillar either, but a pillar of salt.  A reminder that in fiction, a good lie calls for specific details, like that fig leaf that Adam and Eve put on like a bathrobe when God came to the Garden for a mug up, excessive modesty being one of the punishments for succumbing to temptation.  But a high degree of detail gives the impression that the narrator was actually in the Garden observing the characters closely enough to be able to say that the leaf was definitely fig, not maple.  The parables, of which much was made of in my youth, are also tools for teaching and passing on the ethics of a culture, but the most seductive and memorable of Biblical stories are those that promise eternal life.  Most religions offer immortality in one form or another, at one price or another, and the Bible is no different.  A man is hung on a cross and left to die, but comes back to life.  He promises us everlasting life with him in heaven, as long as, once again, we don’t disobey the word of God.  It is marvelous fiction wrapped around a miracle wrapped around an archetype.  But as Jorge Luis Borges, that master of magical realism, writes:  “We are capable of generating the fiction of immortality, yet it in no way exempts us from death.”

Good literature, like the Bible, allows the reader to escape or endure the realities of death, along with everyday trials and tribulations. For hundreds of years the church condemned fiction as a folly for exactly that reason, that it fostered escapism, or offered a way of enduring life that does not include obeying the Word of God.  The church didn’t want the Bible to have any competition.  They were quite the publicists, those early clerics.  Their marketing plan included latching on to any and all European royalty, until the Bible became the unifying text for the entire Western culture.  Even illiterates could quote the Bible because it had been so often quoted to them.  It broadened the minds and scopes of the simplest Dark Ages peasant who might never have left her village, but knew of the existence of other countries and other civilizations because of the Bible.  The unschooled were made aware of history because of the Bible, even if that history was often free from the normal constraints of rational narrative.  In spite of this, or maybe even because of it, they saw in the Bible humanity’s ongoing struggle with right and wrong, and they could relate.  The Bible gave aesthetic shape to emotions and relationships and helped them understand themselves.  Who cares about facts in the face of that?  Religion is a basic response to and expression of the human condition, and it works because it fosters beliefs that aid the struggle for survival, not because it is true. That is the power of religion, but it is also the power of fiction.  What we search for in fiction is not so much reality, but the epiphany of truth and meaning.

This human search for meaning, and even religion itself, probably originated in the dream experience, that deep well from which the storyteller draws.  If the dead appear to us in our dreams, then how then can they be gone forever?  Where are they?  And is that where we’re going too?  The ones who could best explain the strange phenomena of the nocturnal mind, to make sense out of the senseless, were revered, first as shamans, later as gods.  They created stories to help reconcile the dreamer to the dream, which evolved slowly into the sacred literature of consolation and revealed truth.

The science of the brain has explained much of what we used to depend upon stories for, and the end result is that we are losing the biblical narrative.  We have stopped believing that fictional creations are central to our lives, that they can explain us to ourselves or have anything to teach us.  While there are serious pockets of Bible readers around the country, it is no longer the common denominator of the general public that it once was.  The Bible might still be in hotel nightstands, but I’ll bet guests are watching HBO instead of reaching for the small black book in the drawer.  It’s not just the Bible that is losing readers in mainstream society, there is also a simultaneous decline of interest in all fiction.  For to lose faith in the power of the stories of religion is to lose faith in the power of fiction.  Not counting the Bible, fiction comprises less than 5% of the entire book market and most of that is taken up by Danielle Steele.  In spite of this,  fiction writers, in their Godlike roles, will keep creating whole worlds out of nothingness, because something deep inside compels them to do it.  But isn’t that what we all do, everyday, even if we don’t write it down?  We create our world by shaping our experience into some coherent narrative.  We string disparate events together as if our lives were a rational ordering of cause and effect.  We want answers to why something happened, or why someone did or said something, so we make it up by imagining what is going in in the minds of others, and by giving meaning to tragedy, significance to joy, and purpose to the entire range of mundane events in between.  As Borges wrote, “We are all ficcioneros, inveterate Fiction-makers — it is through our fictions, private and public, that we make sense of our world and find some equilibrium in it, it is through our fictions that we create ourself.”

******   This post was originally a sermon I gave as a lay minister at the UU Church in Gloucester, Ma.

2 Replies to “The Beautiful Fiction” 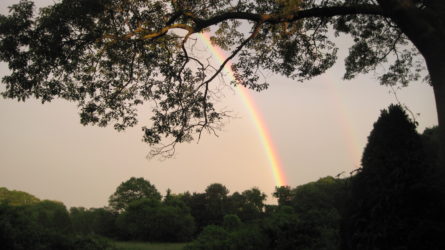