Last week at the AWP conference in Seattle, I participated in a panel called The Greening of Literature: Eco-Fiction and Poetry to Enlighten and Inspire. The discussion was led by John Yunker of Ashland Creek, an environmentally conscious press in Oregon, (and publisher of Float). I was joined by poet Gretchen Primack, and fiction writers Ann Pancake and Mindy Mejia. We had such a scintillating program, I am moved to share my short talk here, starting with a quote from Ian McEwan’s 2010 novel, Solar:

“Professor Beard would not have believed it possible that he would be in a room drinking with so many seized by the same particular assumption, that it was art in its highest forms – poetry, sculpture, dance, abstract music, conceptual art – that would lift climate change as a subject, gild it, palpate it, reveal all the horror and lost beauty and awesome threat and inspire the public to take thought, take action, or demand it of others.”

Professor Beard, with his Nobel prize in physics clutched to his chest, is offended by the idea that art might be a better tool for curing a sick planet than his analytical facts. But for all his scientific knowledge, he fails to understand that art has power. Images created by art by-pass the modern cerebral cortex and go straight to our ancient limbic brain which controls memory and emotion, the part of the brain where we process value judgments, judgments that exert a strong influence on our behavior.

Professor Beard may be fictional, but I know his work. I have read the academic articles of his real life peers, as well as the mainstream essays and books that spring from their scientific research. In writing my novel, Float, which involves plastics in the ocean, I wanted to get the science right in order to make my fictional world real. As John Clancy said, the difference between reality and fiction, is that fiction has to make sense. So when I started Float, I began reading about marine plastics, which turned out to be not just unsightly, immortal, and deadly to sea animals, but toxic to humans as well. As the writing continued, my interest in the health of the oceans expanded. I read about dead zones, overfishing, bottom-trawling, acidification, and the opportunistic appetite of the jellyfish. I learned a lot about the sea, but much of it was pretty dry. Pages and pages of one damn fact after another. No racy scenes, no humor. No plot, no narrative, no characters. No Pauline tied to the train tracks. It was informative, but not particularly engaging. Intellectually, I was concerned, emotionally, I was on the outside looking in. Cerebral writing has a cerebral effect. Academic papers and straight journalism cannot convey human suffering, they can only calculate or report it.

But most readers don’t want to hear about populations, they want a specific person. Not the planet, but a particular place in a moment of time. In reading Solar, I understand environmental product development through the emotions of the characters surrounding Professor Beard. I become disgusted with the brutal competition in scientific circles which prevents many of the best ideas from coming to fruition. I am touched by the simple yearning for love, angered because of an injustice done to an innocent, and then laugh because humans are such idiots. At the end of a novel like Solar, I come to understand that our biggest problem is almost always ourselves.

In an essay published in 2007, Tom Wolfe argued that the newspaper industry would stand a much better chance of survival if editors encouraged reporters to “provide the emotional reality of the news, for it is the emotions, not the facts, that most engage and excite readers and in the end are the heart of most stories.”

Art, not science, creates that emotional reality. Through the use of image, the visual arts have the emotional power to create change. Literary arts have that power too, in spite of the fact that words on a page are the most pathetic and least effective means of communication. Fiction writers and poets tap into the emotions by working with what we’ve got, which is the ability to create images and people with words. A novel engages the reader by relying on fiction’s strength, the exploration of the human condition. And lately, the natural world is pressing hard against that condition.

But if I’d set out to write a novel about the ecological devastation of the oceans and its effects on humans, I would have froze at my keyboard. Instead, I began with the image of a man on a beach looking at some words in the sand. And as I’m writing the scene, I thought to myself, so what does he see at the beach? Sand, water, wind, seagulls, and, sadly, washed-up plastic. So I put them together, and had the man rescue a seagull being strangled by a six-pack holder, which set off a series of events that led to a search for alternative plastics. I hadn’t intended for my protagonist to get so environmentally involved, but just the act of having him notice the plastic was enough to move the plot in that direction. I needed to start with a character and see where he wanted to go.

Where will your characters go in the future? As fiction writers, we want to make a positive change for the planet, but it’s easy to feel overwhelmed. With our current obsession with ‘place,’ we let our characters experience the beauty and ravages of the natural world, as they stand on the rocky shore with the wind blowing through their hair, but they are too often protected from human accountability. It’s hard to make characters aware of something they can’t do much about, because helplessness makes for a sorry plot. But that doesn’t mean they have to do nothing. They can bear witness. We can bear witness.

Not that I think fiction writers are under any special mandate to raise awareness. But I do think that those of us who already are, should not be afraid of letting it into our work. As individuals we recycle and consider our carbon footprints, so why not ask the same of our characters? Some writers may be afraid of opening up the Pandora’s Box of climate change or toxic waste because they don’t know what can be done about it. But fiction does not have to provide the answers, as Chekov said, it only has to ask the right questions.

The flip side of introducing environmentalism to our work is the danger of sounding preachy. Fiction cannot be a cast of straw dogs for the author’s opinions. All a writer can do is tell a good story, introduce challenges, and allow the characters to wrestle with the issues. And wrestle is the operative word, because no issue is black and white. In his memoir, Nothing to be Frightened Of, Julian Barnes wrote, “literature tells us best what the world consists of. It can also tell us how best to live in that world, though it does that most effectively when appearing not to do so.”

Humor helps. Humor lets us deal with our own absurdity, because laughter is often the result of a sudden truth about ourselves. Here we are, big-brained humans in the twenty-first century, supposedly the smartest animals who ever walked the earth, and we are killing ourselves and our world with our own cleverness. What else can you do but laugh? The saving grace in all this is that I believe that the cleverness that got us into this environmental mess will get us out of it. If that doesn’t happen before it’s too late, well then, the joke will be on us.

As writers, our most sustainable energy source is creativity, and we should use it freely. Literature teaches us to notice, to care, and to create meaning. Professor Beard is wrong. We can inspire the public. I’m going to end with another excerpt from Solar, where the professor is being considerably annoyed by another scientist.

“On his weekly rounds, Professor Beard hoped to avoid running into Aldous alone, for the young man was always trying to convince him of photovoltaics, or his quantum explanation of photovoltaics, or to oppress him generally with friendliness and enthusiasm. There were developments in contemporary music he thought Beard should be aware of, and movies that were of particular relevance, documentaries about climate change which Aldous had seen at least twice but would happily see again. There were novels Aldous wanted him to read – novels!” 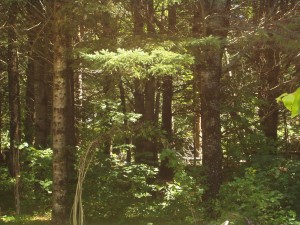